Replacing unsuitable soils is the most intensive, trail-hardening technique. Problem soils are excavated and removed until a subbase of competent subsoils or gravel has been exposed. High-quality material is placed over the subbase to bring the trail surface up to the trail’s original level. This process is appropriate for trails with a suitable subbase close to the surface and a convenient source of high-quality fill. The work generally requires heavy equipment. It is most appropriate near trailheads and along highways where heavy equipment can be used to good advantage.

Where a suitable subbase is not close to the surface or excavation work needs to be minimized, geotextile fabrics may be used to provide a base for surface capping. The use of geotextile materials extends the application of capping to many areas where removal of substandard surface soils is impractical.

Geotextiles, also known as construction fabrics, are widely used in roadways, drains, embankments, and landfills. They are constructed of long-lasting synthetic fibers bonded by weaving, heat, extrusion, or molding. They come in a wide variety of types including fabrics, sheets, or three-dimensional materials. They can be pervious or impervious to water passage.

These functions are illustrated in figures 9a, 9b, and 9c. Geo-textiles work as separation fabrics when they are placed between gravel caps and underlying soils to prevent the materials from mixing. The geotextile serves to maintain the original thickness and function of the gravel cap as a load-bearing layer. Geotextiles increase soil stabilization by maintaining the load transfer capability of the gravel cap. This increases effective bearing capacity and prevents subsoil pumping. Geotextiles reinforce soils by providing a structure to bond the gravel cap and underlying soils.

The geotextile fabric locks the two materials together and allows the soil to receive a load across a broader footprint. Geotextiles also help maintain the drainage characteristics of the gravel cap. In addition to use in trail tread, geotextiles can have important applications in erosion control, drainage interception (sheet drains), and ditch liners. 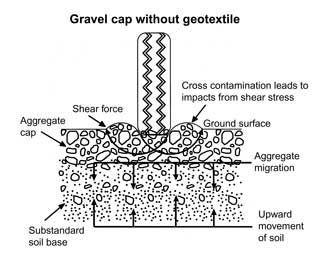 Figure 9a—Gravel cap without geotextile. The aggregate cap will lose strength as the gravel is contaminated by the subbase. 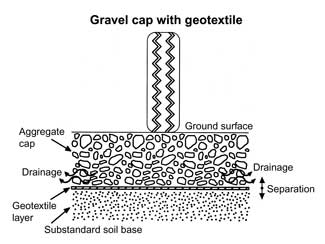 Figure 9b—Gravel cap with geotextile. The geotextile layer prevents the migration and contamination of the surface gravel cap by underlying poor-quality soils. 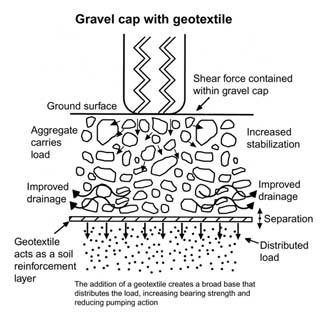 The National Park Service experimented with the use of geo-textile and gravel placement during the summer of 1999 on degraded trail segments of a former mining road connecting two administrative sites in the Yukon-Charley Rivers National Preserve (Meyer 1999a). About 678 feet of geotextile with a 4- to 6-inch gravel cap was installed over soils in areas that crossed melted permafrost soils. Using this technique, the road alignment was reclaimed as an OHV trail.

Geotextile and gravel placement is relatively simple. The Yukon-Charley approach was adapted from Forest Service methods (Monlux and Vachowski 1995, figure 10). This technique provides a rim structure to minimize the loss of cap material (figures 11 and 12). A local source of suitable gravel was identified. One-half-cubic-yard belly dump trailers, loaded by a skid-steer loader and towed by 4×4 OHVs, transported gravel to trail construction sites. 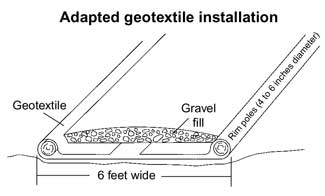 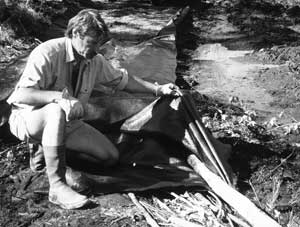 Figure 11—The author installing woven geotextile around a rim log in the geotextile gravel-capping test installation at the Yukon-Charley Rivers National Preserve in Alaska. The rim log held the gravel cap on the installation. 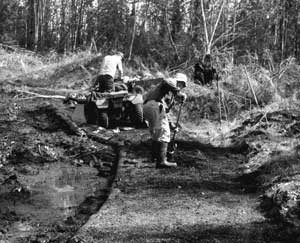 Figure 12—A geotextile and gravel-cap installation over permafrost-degraded soils in Yukon-Charley Rivers National Preserve in Alaska. Use of geotextile and a gravel cap on this trail allowed the National Park Service to construct a 6-foot-wide OHV trail over a 3- to 4-foot-deep muck hole.

About 45 labor days and 80 cubic yards of gravel were required to construct 678 linear feet of 6-foot-wide trail, roughly 45 work hours per 100 feet of hardened trail. Construction efficiency dropped considerably when construction sites were more than one-quarter mile from the gravel source because of the small size of the transport vehicles and the round-trip travel time. The loaded trailers, weighing about 2,000 pounds gross vehicle weight, also seriously degraded marginal trail segments along the haul route. Future operations at the site will use larger haul vehicles operating over frozen soils during the winter months.

The geotextile used on the project was AMOCO 2000, a light-grade woven synthetic fabric. The material cost about 5 cents per square foot, quite inexpensive, considering all other costs. Overall construction costs for the project were estimated at $3.60 per square foot using a labor rate of $18 per hour.

Cellular Confinement Systems—Cellular Confinement Systems (CCS) are three-dimensional, web-like materials (figure 13) that provide structural integrity for materials compacted within the cell. They are engineered so cell walls limit the transfer of shear forces within the soil. Employed worldwide for a wide variety of uses, cellular confinement systems are a well-accepted soil engineering tool (Ron Abbott 2000). In Alaska, these systems have been used with success on military runways and remote radar sites, Arctic tank farms, construction sites, and boat ramps (Joseph Neubauer 2000). The systems also have been used when constructing shallow-water fords in the contiguous 48 States (Forest Service 1987). 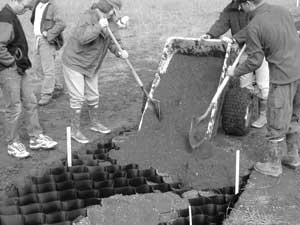 Figure 13—A cellular confinement system being installed on an experimental trail in southcentral Alaska. Four-inch-deep cells were formed by expanding the cellular product accordion style, then backfilling and compacting with a suitable fill material— in this case, sandy gravel. The sides of the installation were confined by a 6-inch-deep trench.

A cellular confinement system consists of a surface-aggregate wear surface, the cell membrane, fill material, and an optional separation fabric (depending on site characteristics). Fill material is usually imported gravel, but onsite material can be used in some circumstances (the use of onsite fill will be covered later). Installation of the system is labor intensive. The smallest cell commercially available is 4 inches deep. A minimum of 6 inches of fill material is required to fill the cells and provide a 2-inch wear surface, about 1 cubic yard of loose material per 6 linear feet of a 6-foot-wide trail. While the cell material alone costs about 70 to 90 cents per square foot, installation costs include the costs of any separation fabric, the fill, cap material, transportation of materials, cell panel connectors, and excavation of a trench or the construction of a curb or rim to confine the materials.

Test installations of cellular confinement systems for trail use in the contiguous 48 States have shown mixed results (Jonathan Kempff 2000). While the systems provided excellent structural reinforcement for soils, maintaining the surface wear cap to protect the cell membrane has been difficult. Without adequate curbing, capping material tends to erode from the cell surface. This is particularly true on sloped surfaces. With the loss of capping material, the cell membrane becomes exposed to damage by trail users. Although such damage usually doesn’t significantly affect the cell’s strength, exposed cells are unsightly and create a tripping hazard.

A somewhat similar problem occurred in the Bureau of Land Management’s White Mountains District in Alaska. The agency reported mixed to poor results using cellular confinement systems on roadways in the Fairbanks area (Randy Goodwin 2001). Cellular confinement systems were used to cap four culvert installations on the Nome Creek road. The systems were installed in 50- to 200-foot segments to provide a stable fill road surface. Spring melt of overflow ice (aufeis), that typically plugs the culverts, scoured fill material out of the web cells each year. Replacing the fill without damaging the cell structure was difficult and time consuming.

Also in Alaska, about 900 feet of cellular confinement systems, with recycled asphalt fill and cap, were installed in 2000 on an access trail in the Turnagain Pass area by the Forest Service (Doug Blanc 2001). Based on the success of that installation, the Forest Service is planning another 3-mile installation adjacent to a visitor center. Both trails were designed to meet the requirements of the Americans With Disabilities Act and are not representative of remote OHV trails. A more representative installation is a 20-foot test installation at Palmer Hay Flats State Game Refuge (figure 13). Since its installation in August 2000, the trail surface has been performing well, but the capping material has begun to show signs of erosion (Colleen Matt 2001).

Cellular confinement systems are manufactured under a variety of trade names, including Geoweb, Envirogrid, and TerraCell.