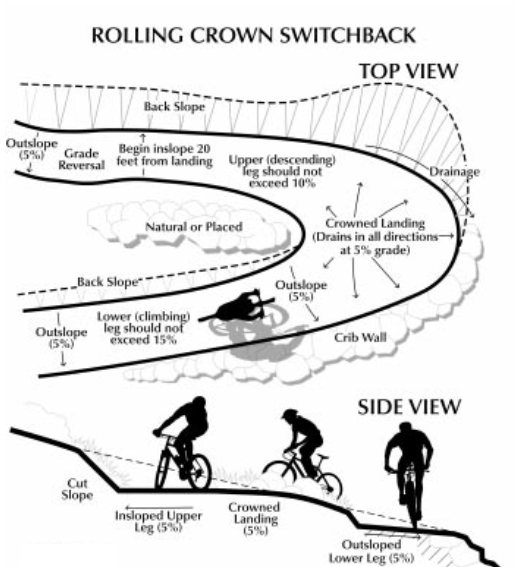 “What makes switchberms different than rolling crown switchbacks [depicted above]?

-the leg just above the turn is a gentle grade, keeping speeds in check for descending riders (5%-8%).

-the turn is on a nearly level platform and slightly bermed (insloped 6%-9%).

-turning diameter is between 14 feet and 18 feet depending on width of trail, sideslope and intended users.

Do all you can do not to exceed grades above 20% for the lower leg steepness — this is where overall trail analysis is needed before you start digging.

Obviously, for bike parks and fully bike-optimized turns these would be used only as a last resort. Bike park turns, and turns designed for one-way bike traffic with higher speeds, generally should be built on fairly gentle sideslopes, allowing for a much bigger turning radius with a diameter of 22 feet or more.” source: imba mark-eller

Hans with Bellfree Contractors has been doing this for some time now, with an added entry berm made for countersteering into the switchberm:

^Three Hawks at Crafton Hills…also evident at Santiago Oaks on Bumble Bee, and some other Bellfree trails, like Palos Verdes below:

^hard to see the reversals before and after the turn

slightly different ways to berm and drain below…also a little hard to depict the grades on film:

The tread at each end of the turn will be full bench construction, matching that of the approaches. As the turn reaches the fall line, the amount of material excavated will decrease. In the turn, the tread will not require excavation other than that needed to reach mineral soil.

Guide structures should be placed along the inside edge of the turn. Temptation-reducing barricades can be added if necessary. The psychologically perfect place to build climbing turns is through dense brush or dog-hair thickets of trees. Be sure to design grade dips into the approaches.