Number Place or Sudoku has nothing to do with trails, but I don’t have another website to post this on and I assume someone might find this useful, so…

Sudoku became more broadly popular in the US and made its way into being printed in newspapers next to crossword puzzles around 2005. That’s how I discovered the game. My dad usually does the crossword every morning, and had recently started doing Sudoku as well after it showed up (in the Arizona Daily Star I assume). It sparked my interest at the moment.

He showed me the game on a visit to see him and my mother in Tucson, Arizona in the spring of 2006. I was visiting because we were flying to Sweden with my brother’s family. It was that long plane flight that I had a memorable connection with the game because I had a eureka moment on a simple systematic solution to the game.

I took some puzzles for the plane trip and when we made a connection in London I grabbed more from the UK’s Daily Mail newspaper because I had solved the handful I took with me. After a few games I realized it was a logic puzzle or math game and was starting to see a means to systematize or visualize my solution method.

It’s taken me 16 years to finally share my grid with others, and here we are. I kept the Daily Mail clipping with some of my first runs of the new grid I made to solve them. I think this was the last game I filled in not using the grid I imagined on the flight. When I got home I used Excel to make the grid for solving the empty two below: 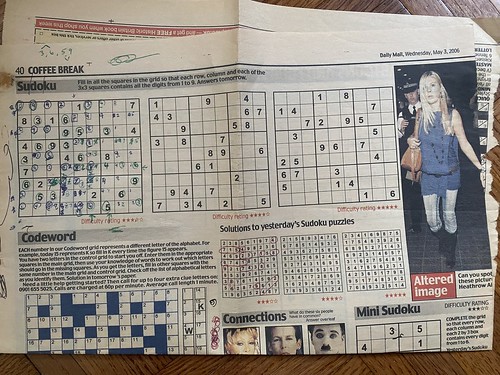 I think I only had time for the first Daily Mail game on my flight to Sweden from England.

I didn’t play at all after we landed, but on the return flight I started thinking about how to structure a cheat sheet of sorts to help conceptualize or lay out the solution possibilities so you don’t forget where you are in the process of solving the “Classic” version of Sudoku.

I assume there are many systems or approaches to this game and I assume someone else has done what I came up with on my own as well. After I realized this solution I rarely played anymore because I essentially solved all the possibilities in one go, or had a foolproof proof. The process was nearly the same for me without the grid, but the “729 Grid” (as I call it) is great for the harder to solve puzzles with less hints/numbers. There is still some work involved, but the grid looks like and acts as scaffolding to systematize the solutions hunt faster or more easily….if that’s what you want.

You can download the Excel template below, or print from the PDF. Here is what it looks like in process or solved: 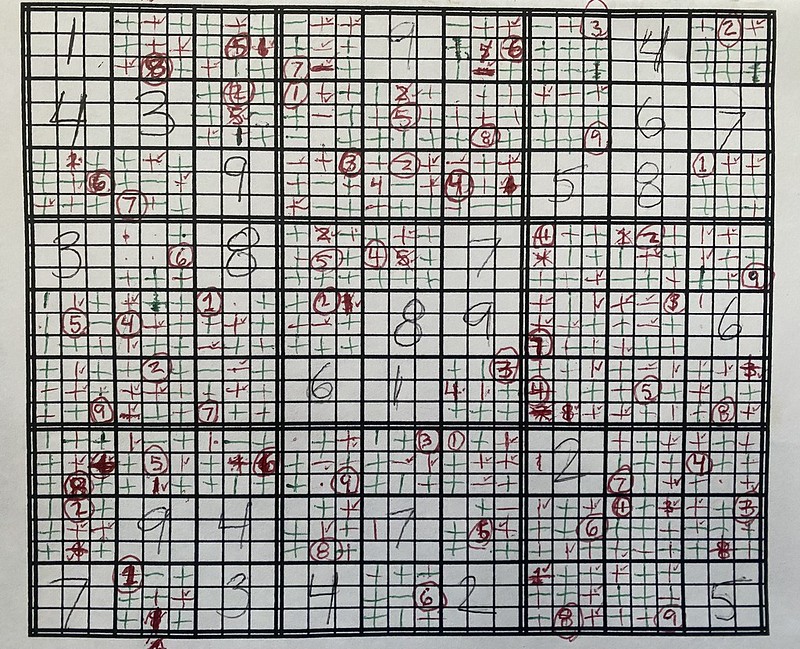 The green and red vertical and horizontal lines represent sub-cells where a number is not allowed, the lines are used instead of numbers as to not confuse solutions from non-solutions. Solutions have numbers, lines are non-solutions gathered from information in the relevant cell rows or columns.

The crux of the solution to me was to further subdivide the Classic Sudoku variant grid. The classic grid is a 3×3 block cell grid (double borders above, bold lines in the newspaper clipping) further divided into 3×3 sub-cells, so it’s really a 9×9 sub-cell grid. To me it made sense to further subdivide it into a 27×27 grid with 9×9 regions as each of the 3×3 grids has 9 possibilities as well- the 3×3 grid needs 1 correct of 27 possibilities. Lost yet? Why stop at 2 divisions of 9 instead of 3?

I should just make a video, but this might be helpful if you need more help: