All pneumatic tires flex from side to side under lateral load shifts – it’s in their nature. One reason that wider rims give tires more lateral support is that a wider rim ensures that the tire’s contact point hovers between the rim flanges. It is possible for a tire’s contact point to migrate outside the rim flanges and in such case, the line of force between the tire and rim would go over-center. In the same way that a quick-release lever generates an exponential amount of clamping force when it goes over-center as it is closed, once the tire’s contact patch moves outside of the width of the rim flanges, the tire’s ability to support the rider is significantly reduced, while the leverage it imparts to lift the opposite side bead from the rim would substantially increase. This effect would explain the feeling of a tubeless tire burping – the tire suddenly collapsing under the weight of the rider or the G-force of a turn and then losing pressure. Of course, a narrow tire could not flex far enough to allow the contact patch to get near the danger zone, but a big, flexible 2.35-inch tire on a 22-millimeter (OD) cross-country rim certainly could. 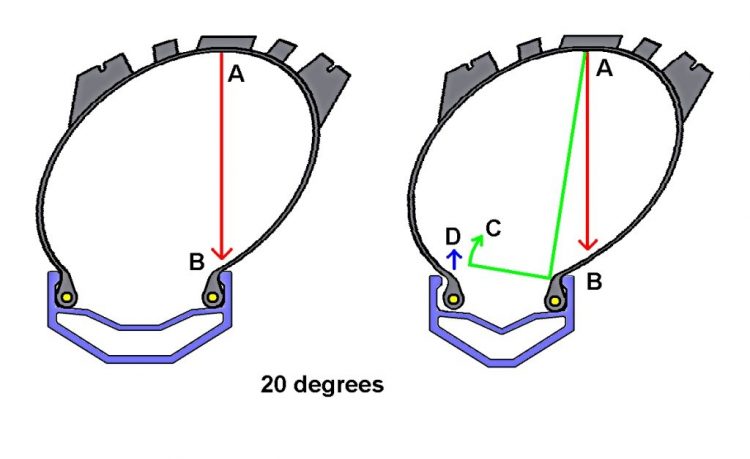 At 20 degrees of imaginary lateral distortion, the wide-rim tire’s contact point is just nearing the danger zone over the rim flange (B), but it can still support a load. The narrow rim’s tire has flexed to the point where the contact patch is over center (B) and the bending forces are creating tension across the tire casing which pulls on the opposite bead, drawing it up and away from the rim flange (D). The seal has been broken and air may be already leaking. more