We rode SART today . We ran into a dog near Glass Rd. A male dog with a radio collar. The dog was extremely timid, and cowered in front of us if we approached and never wagged its tail. It remained tucked. He was looking a little lost, thin, and devoured a few Clif Bars (not with chocolate of course).

We eventually rode off. On the way back down we ran into him again. It was now several miles up form Glass Rd. It turned around and headed back to Glass in front of us. It stayed in font of us running in fear, looking back frequently, its tail still buried between its legs. It was confused, or appeared to be. When we reached an opening it hit the deck and cowered as we passed. We tried to get it to follow us back to the road, but it would have nothing to do with us except perhaps another Clif Bar.

I don’t know if this dog was used for treeing bears and bobcats, but just so you know people use radio collared dogs for this purpose. I’m not sure if this was the case with the dog today.

I don’t have a problem with hunting. But I don’t know that I’d call having your dog chase a bear or bobcat until its too tired to run hunting. The bears and bobcats eventually decide to climb trees, the hunter finds the dog by radio, and then they shoot the sitting duck.

Do what you will, but know that this crap happens. I only discovered this because we were really concerned about the dog, and a little searching led me to the articles, which then made me wonder if that’s what the dog was used for. I hope not. And kinda hope the dog never goes home because it didn’t appear to have a good one. I wish you luck dog… 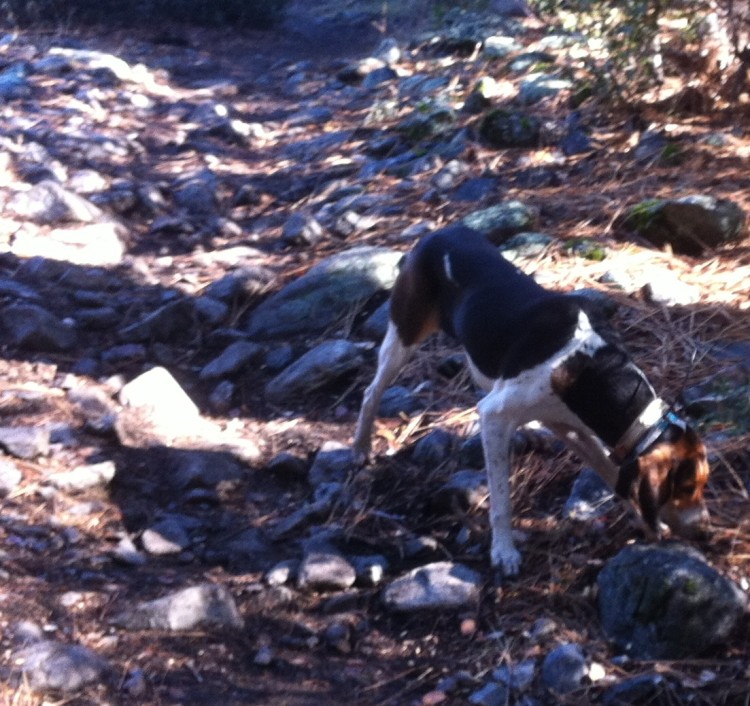 The collar had an antenna (5 inch) that’s a little hard to see in the photo^. I think its a Foxhound (http://en.wikipedia.org/wiki/Foxhound). I had an uncle that kept his hunting dog chained outside all day with very little human contact, and never walked it. I felt so bad for the dog. However, my grandfather in Sweden had his hunting dogs inside like family. They got lots of attention and love, and were great hunters. I don’t know this dog’s story.

I called the San Bernardino Mill Creek Ranger and Animal Control. AC said bear season is open, and they might know who’s dog it is, but reassured me they would investigate and at least have a “last seen” location noted if the owner called.

Animal control said the dogs are allowed to roam, and that its illegal to mess with them or the collars. This was all new to me, but common sense anyway. I immediately assumed “hunting dog,” but it was disturbing to see its reaction to us. I can only hope the dog is being used “correctly” and is not abused at home or abused in the sense of hunting to tree bears and bobcats. Beyond that, the Dept. of Fish and Game have their hands full in trying to stop poaching and the like. I wish them luck as well. To me the dog wasn’t doing anything wrong, other than slowing us down for a mile or two, but I have to say it was kind of cool to have a four legged partner for a spell (though I don’t know if it enjoyed it).

I just hope the dog is not beaten, regardless of it it’s used for hunting or not. It just didn’t act normal. Something was wrong.