The new Skyline trail above Big Bear is a special experience with phenomenal views. The trail parallels Forest Service Road  2N10.  The main sight is several snow capped (at this time) mountains: listed east to west- Grinnell, Lake, Gorgonio, Anderson.On the west end you can see Lake Matthews, and maybe Lake Perris. Also, though not visible, as you look south at the the mountains, there is another gem of a trail below the snowline, The Santa Ana River Trail, or SART (runs parallel to and below the 38- light blue track below). 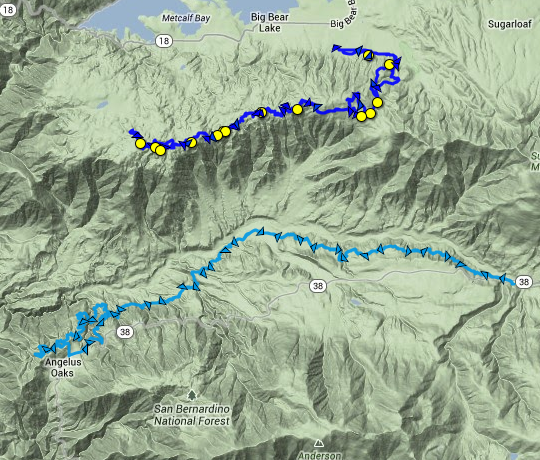 There is a great deal of info on the birth and life of the Skyline trail here: http://trailsfoundation.org/skyline-trail/

There is a trail off of Skyline that goes to Seven Oaks, and consequently SART. If Skyline and FS roads can get you to Sugarloaf, then this could be done: SART Super Shuttle.

There was snow at Snow Summit, mostly man-made at this time, and a little left in a few spots on the trail. A few small sections of trail were frozen solid. The weather was great, but I knew we were pushing a finish at dark, and a drop in temperature. The drop was significant, from low 50s to low 30s– it hurt. The Forest Service’s control burn only provided smoke, and regretfully not heat. 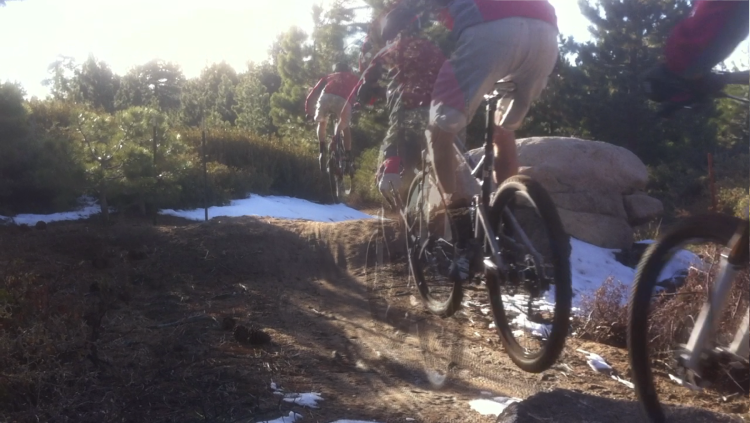 The trail is certainly a cross-country layout with very few places for conflict from what I could see. There are maybe two to four high value descents/climbs, but at 7,500ft it all feels like a climb. Combined with the soft soil and new condition, this trail is on the slow end, but the views are hard to beat. It’s certainly a special trail.

Bellfree Contractors did a great job spicing up the trail with a few bike-specific trail features like log rides, and a few “cheese-wedge” jumps and ledges. There’s even a small rhythm section to pump you through a flat spot.

Expect the potential to deal with a lot of trail debris however, as this is a fire break area. I got two flats riding over the waste from clearing the break. I was a little disappointed how much clearing debris was left on the trail. Perhaps they’ll come later to clean it more thoroughly.

Greg’s legs were badly damaged, but he made it out with minimal blood loss: 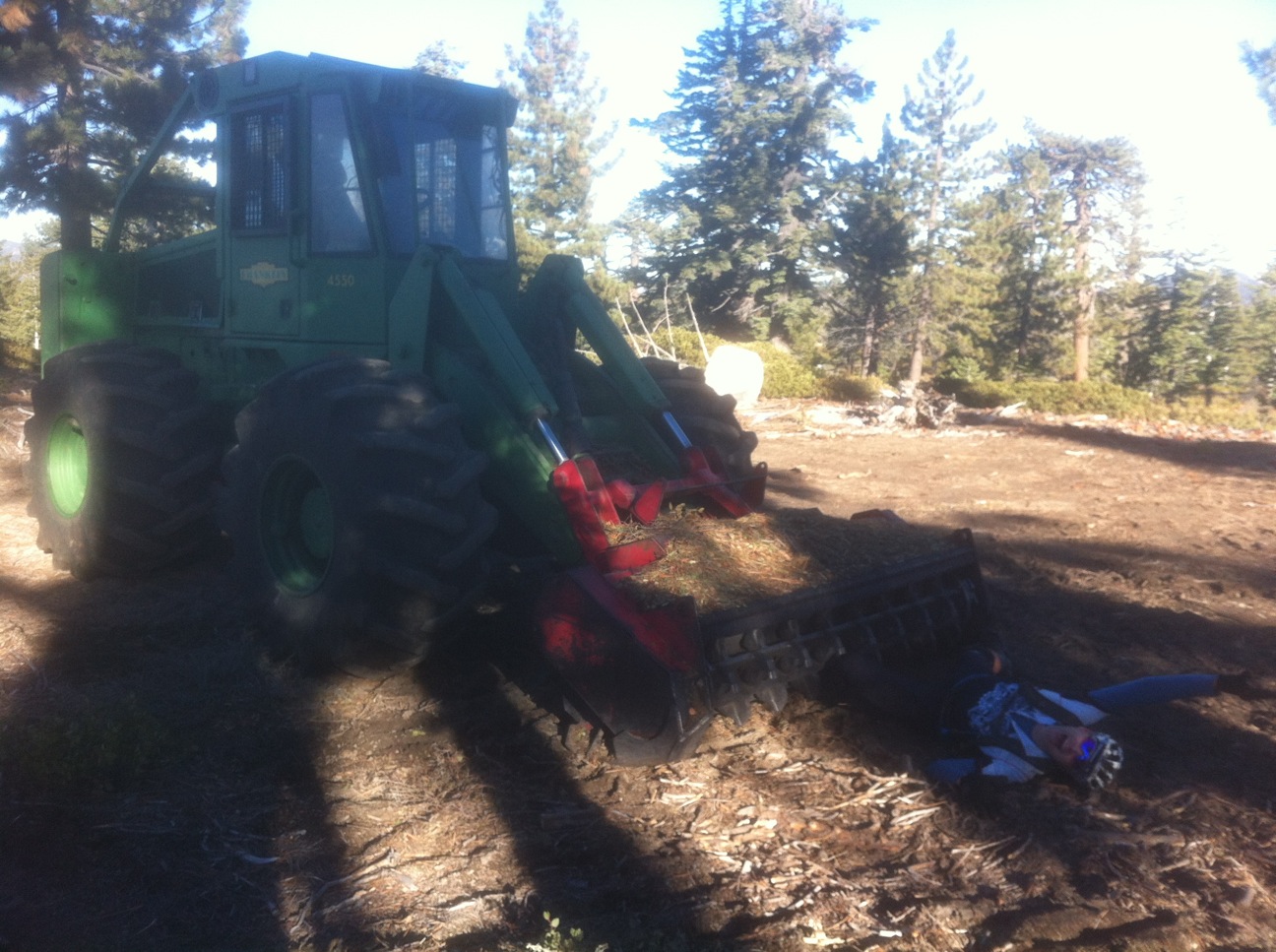 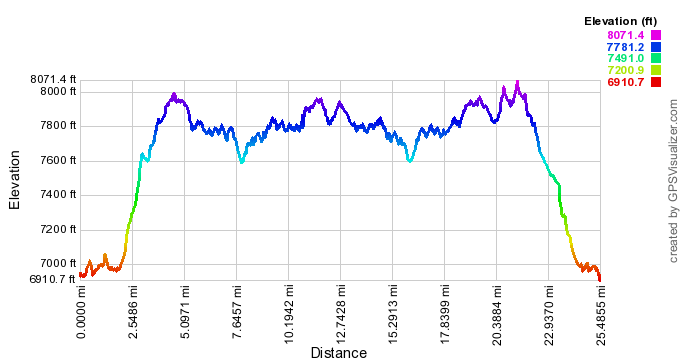 Below is the 8 mile Skyline Trail profile, one direction, from where it first leaves FS 2N10 to where is drops back out again 8 miles away (there was a missed turn just before mile seven, but it was a short distance- if you zoom to track map below you will see it). 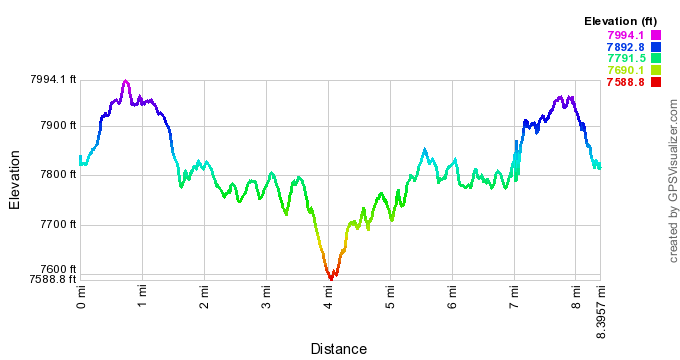 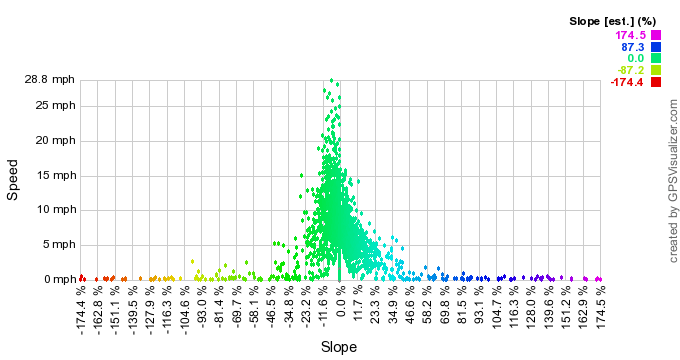 ^This second speed/slope plot is for the 8 mile section alone, again, there are probably some outliers and gps anomalies