There was a recent article in the Wall Street Journal on yours truly. While the title, “A Trail Designer’s Job: Get Inside Hikers’ Minds” is apt, I do more than design and layout trails. (The print title was “Blazing a trail is all in a day’s work.”) Nonetheless, other than looking like a personal ad on match.com or something, Tyler did a relatively good job at telling a story in few paragraphs, but I made some clarifications below. 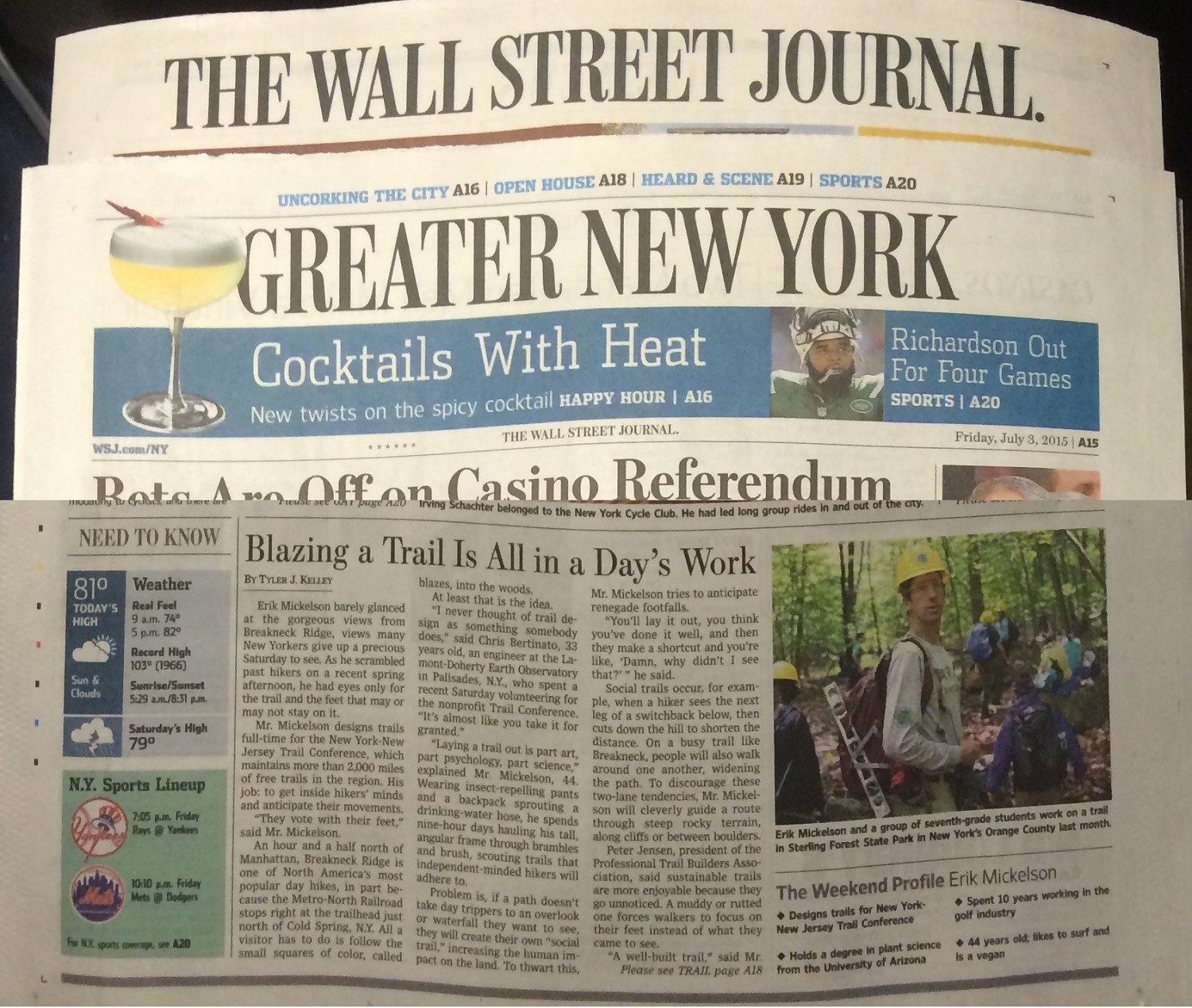 The article, or the image gallery really, also appeared here: A Lesson in Trail Building

“Mickelson designs trails full-time”…Actually, that’s “part” of the time, maybe half? More than half if by “design,” we mean recommending solutions for existing trails, designing (or better laying out) reroutes or realignments, and how to build structurally sound stone structures. The real ‘design’ comes to fruition at installation while unearthing or carving the trail and choosing stones in the build stage if they are not apparent during the layout process. The build/design typically takes a significant amount of time beyond the time it takes to lay out the scope of the work. To continue, I also train, assist, and manage conservation corps members on trail projects, work with or train trail volunteers (informally, and formally in workshops), walk and talk with land mangers, agency partners, biologists, historical experts, and volunteers. I also create maps, draft work plans, order and maintain equipment and supplies, and I do some volunteer trail building on my own time as well.

“His job: to get inside hikers’ minds and anticipate their movements.” AND the minds of: mountain bikers, trail runners, and equestrians…not to mention motos and potential trail poachers using trails not intended for their use type. I tried to, and did discuss, these “other” trail user groups, but Kelly didn’t seem that interested, his focus was hike-centric. The marginalization of these “other” groups continues…much to my chagrin. Media spin perhaps? Of all the trail user groups by the way, mountain bikes have the least impact to trails, and trail critters (birds anyway).

“Mickelson tries to anticipate renegade footfalls.” …or fix or lay out new lines that are efficient, and placed where most will trod (runners, bikes and horses included)…no guarantees though.

“Social trails occur, for example, when a hiker sees the next leg of a switchback below, then cuts down the hill to shorten the distance. On a busy trail like Breakneck, people will also walk around one another, widening the path. To discourage these two-lane tendencies, Mr. Mickelson will cleverly guide a route through steep rocky terrain, along cliffs or between boulders.” I don’t recall discussing “two-lane tendencies,” or a solution being to route into steep rocky sections. Perhaps I discussed ‘braiding,’ or where trails spit and rejoin. That’s likely to widen trails because most people want clean and open footing, not rocky/bony chaos (in ‘large’ doses for “most” people anyway). Edges, gateways, and anchors can help keep people on track, and I try to include them in layout and design. I’m less concerned about people passing each other to widen a trail unless numbers are high, than I am about people making new social trails or widening a trail because its too rocky, or contains wet spots.

“When the waves were flat, he hiked in the woods behind his house.” I did often walk those trails, but I spent more time mountain biking or riding a bmx rig. My favorite hiking back then was with my parents on the AT near Piney River, VA. When I moved to CA I almost exclusively mountain biked when not surfing. The same goes for Arizona, where I spent five years. The east has me hiking and trail running more than riding (at this time anyway). Perhaps because I live behind what mountain bikers here call “the Orange curtain” (Orange County New York and the surrounds). There just aren’t as many shared use trails compared to single use trails locally as there were out west. Thankfully that is slowly starting to change.

“One of Mr.Mickelson’s worst enemies is water.” And the gaggle of conservatives on Wall Street, or its talking heads, not to mention media bias, not to mention trail elitists, like hiking or mountain biking supremacists.

“State biologists denied the plan, saying it took people too close to protected habitats, like rattlesnake dens.” Of the things that bother me about the article, this disturbed me the most. Especially when I did a “fact check” with Kelly– which I had to request. Of course by “facts” that mostly meant my age and demographic information. When he said something like ‘some trails don’t get approved’ during the fact check, I told him I didn’t want him to misrepresent any issues or ill will towards biologists or trail “disapproval” in the article as to not tarnish the relationship I have with agency partners. I didn’t want him to report on this at all, although approval and disapproval are a part of the process. Kelly should have couched this as a general statement about trail approvals and plant/animal habitat, and/or historical relics, not misrepresented specifics. To me, he conveys that as the case in the area he referenced. Whether this was an editorial slip, or spin, I’m not sure. I’m a little disturbed as I did not mention snakes in regards to Breakneck, nor would I want him to, but he did anyway. In the end, I’m not phased by being told by biologist, historians, or archaeologists that a trail segment should not go in a certain area. Although sometimes it’s disheartening, I ultimately want what’s best for sensitive habitats and relics, and I sleep better for it. I came to the north east from very fragile habitat in coastal southern California where trails go through similar approval processes. I trust the biologists here, as I did in California, and have no problem with less trails, closing trails, moving trails for habitat sake, or fixing existing trails if possible to avoid people invading virgin habitat. I think some places have too many trails where some could stand to be closed for “redundancy” sake, and in other places there may not be enough trails, or trail linkages. Ultimately, we are visitors in the few open spaces we have, spaces where plants, insects, fungi, and animals… have to do what we strive to do– to go through life with as little turbulence as possible.

“There are times when I kill some insect, or we overturn a rock and there’s a snake or a lizard that gets injured…” Most rocks have nothing under them. It depends on what time of year and the location. I would say 95-98% of time there are no large critters under the rocks we move or use. Ants, pill bugs, spiders, millipedes, and worms are the most common, and may push that percentage to 80-85%. I would put injury at somewhere near 1% or less? of the 5%? we uncover, as we usually lift rocks straight up. Kills rarely happen when lifting. We do drag rocks as well sometimes, but typically lift and check, and make lots of racket and vibration beforehand. If there is an injury we may be prompted to kill them to relieve any suffering– not easy for any of us, and I doubt any trail builder is proud about this ill, especially, as Kelly points out, because I am a vegan, or against speciesism (among other reasons). I do wish he wouldn’t have made my being vegan such a big deal, again it seemed a little like an ad, although I think that’s how they run that feature in the Journal. I honestly can’t say the Journal is something I read regularly.

“Nearly 3,000 hours of volunteer labor by people like Mr. Yu went into building the Appalachian Way…” Although it didn’t say Daniel Yu volunteered on Appalachian Way, to clarify, he has volunteered a great deal on Bear Mountain, especially the upper east face, not Appalacian Way.

“It takes me three minutes to walk by something it took two weeks to build.” If we’re lucky. Sometimes it might take two weeks to build a section that is passed in 3 seconds. Side hilling or bench cutting an 18 wide trail by hand can take up to 2.5 ft/hr, or 0.25 ft/hr for some rock work. Machines for excavating bench can increase productivity by more than 10x.

Trail design goes beyond deciding where to route it, to include standards for the structures and building the trail tread itself given the user group(s) and setting in question. It can be fun, and extremely satisfying, but it isn’t without some tribulations, surprises, and frustration as well.

I’m relieved the WS Journal went outside of my world to talk with Peter Jensen from the PTBA. I recommended he contact some others in the business as well, but the article was mostly about my world. Suffice it to say that I salute everyone involved with any aspect of seeing trails into existence, and taking care of them as they age. Thank you, and good luck…you too Mr.Kelly.

I only went out for a walk, and finally concluded to stay out till sundown, for going out, I found, was really going in.