I had finally given up on the Bad Branch trail. I was 22 miles in, starting at the White River Bluff trail head, planning a big clockwise loop: orange (bald scrappy), to blue(scappy), to yellow(jack’s), to red(bad branch), to blue again, to blue/orange (scrappy/bald scrappy co-alignment) (see map below). It would be close to 40 miles leaving out only the bottom section of Bald Scrappy, and the White River Bluff trail, but now I was leaving out more than I wished. 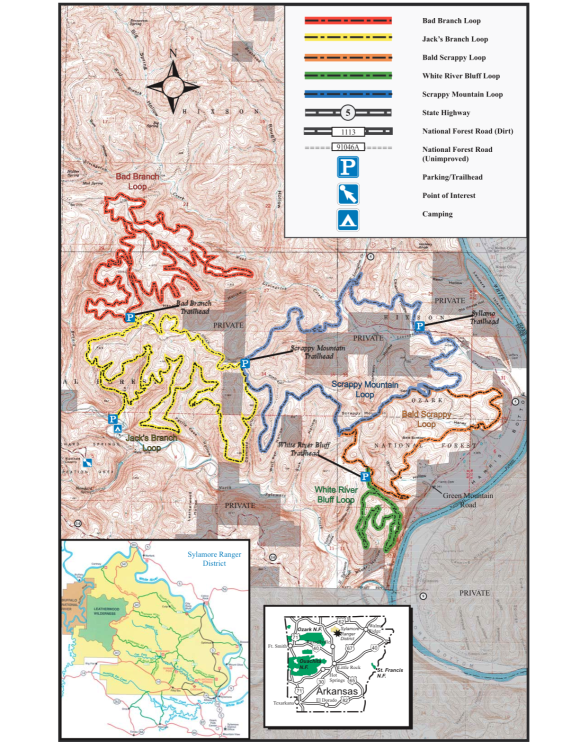 I met Denny, better late than never, when the rest of this story ends. Denny was on the dirt road that hits all the trail heads. I can’t exactly recall what transpired, but after a little chat I was following him on a way out, assuring me it was the best way to avoid the road and give me a little more trail riding, but not within my original plan, that was finally scrapped on Bad Branch. I was ready to head home, but Denny told me in a cool sticky accent, “come-on lets go, I need someone to ride with anyway…” 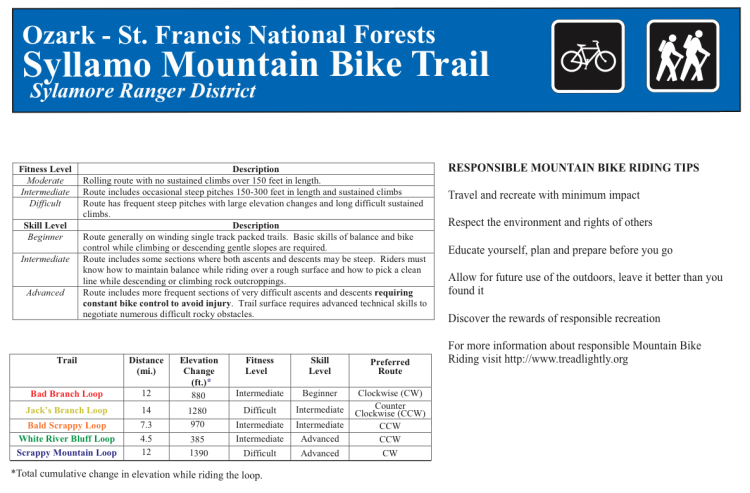 I wish I would have seen this^ sooner, as it has loop direction suggestions (pdf source). I used a topo to help me, but I apparently chose the sub-optimal direction, though I had some great downhill bits anyway. The topo was hard to read, pixelated, and the trails follow the contours pretty close, so it wasn’t easy to see descents/ascents. I figured it would be good either direction so I didn’t give it much thought. It’s when trails blatantly bisect contour lines for miles that you want to take notice, and the map didn’t raise an eyebrow in this regard as I recall.

Denny, as it turned out, was part of a local group that cleans Syllamo. They’re aptly named The Syllamo Trail Cleaners. In that sense, they are a trail crew, but it seems they are trying to say they see no sense in messing with the tread much, mostly brush. Which makes sense given the trail tread is mostly fine.

According to Denny, they usually wait until first frost, then knock everything back. Not a small undertaking from what I gathered so far. He was distraught over some of the growth, and a section the Forest Service worked on. A few times he stopped to clear a few select branches, using a folding saw when needed.

We eventually parted ways, giving me explicit directions on how to get back to my car. I left feeling better about Syllamo, and about the rest of the day in general, and how. Thanks Denny (and the STC)!

Denny on a section:

The rest of the story…

This place is…far, or removed, there isn’t a big populated area for some distance, which was a good thing in my mind after being close to several big cities recently. 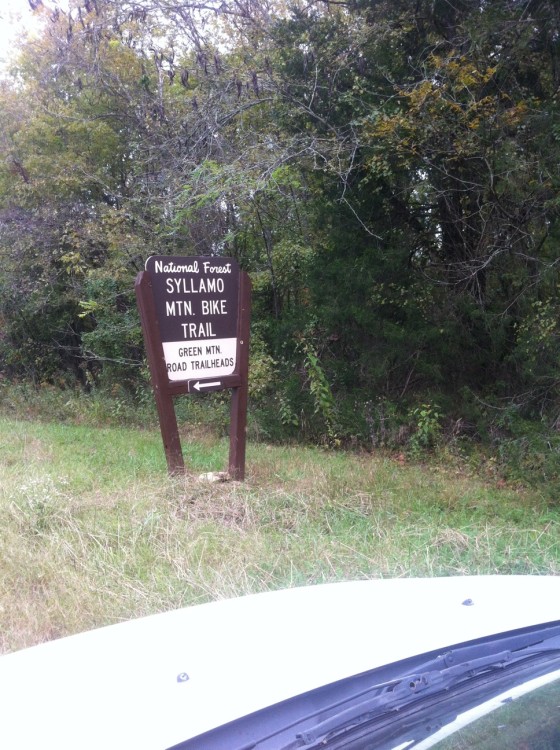 A few leaves had fallen, the forest looking a little gray in spots. There wasn’t really a bite to the morning air yet, not today anyway. I had driven away from the last small town some time ago when I finally saw a sign on the road and thought, “damn, I’m welcomed here, I’m getting recognition…now this is gonna be good, this is cool…” It’s not that this is that big of deal, but it sort of is because the sign said “Mtn. Bike Trail.” For a long time, and even today, I feel ‘second class’ sometimes because I ride a bike on trails. There certainly is segregation and some ‘hate’ in effect in some areas. It’s not necessarily an apples-to-apples analogy to racial segregation, but it’s in the same zip-code.

Spirits now lifted I turned up the dirt road to find my destination, the lowest lot. Another sign, and another, I felt at home. 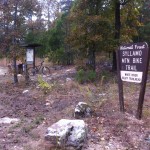 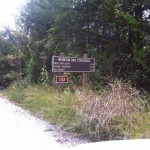 I was off to a good start, but it ended quickly with a trail totally covered with Forest Service clearing debris from twigs to small sized trees and big branches. After a short walk to where I thought the trail began I was back on the move for a long day, but  a minute later I had to walk again, same reason. Luckily that was the last of it. Where did the trail go?: 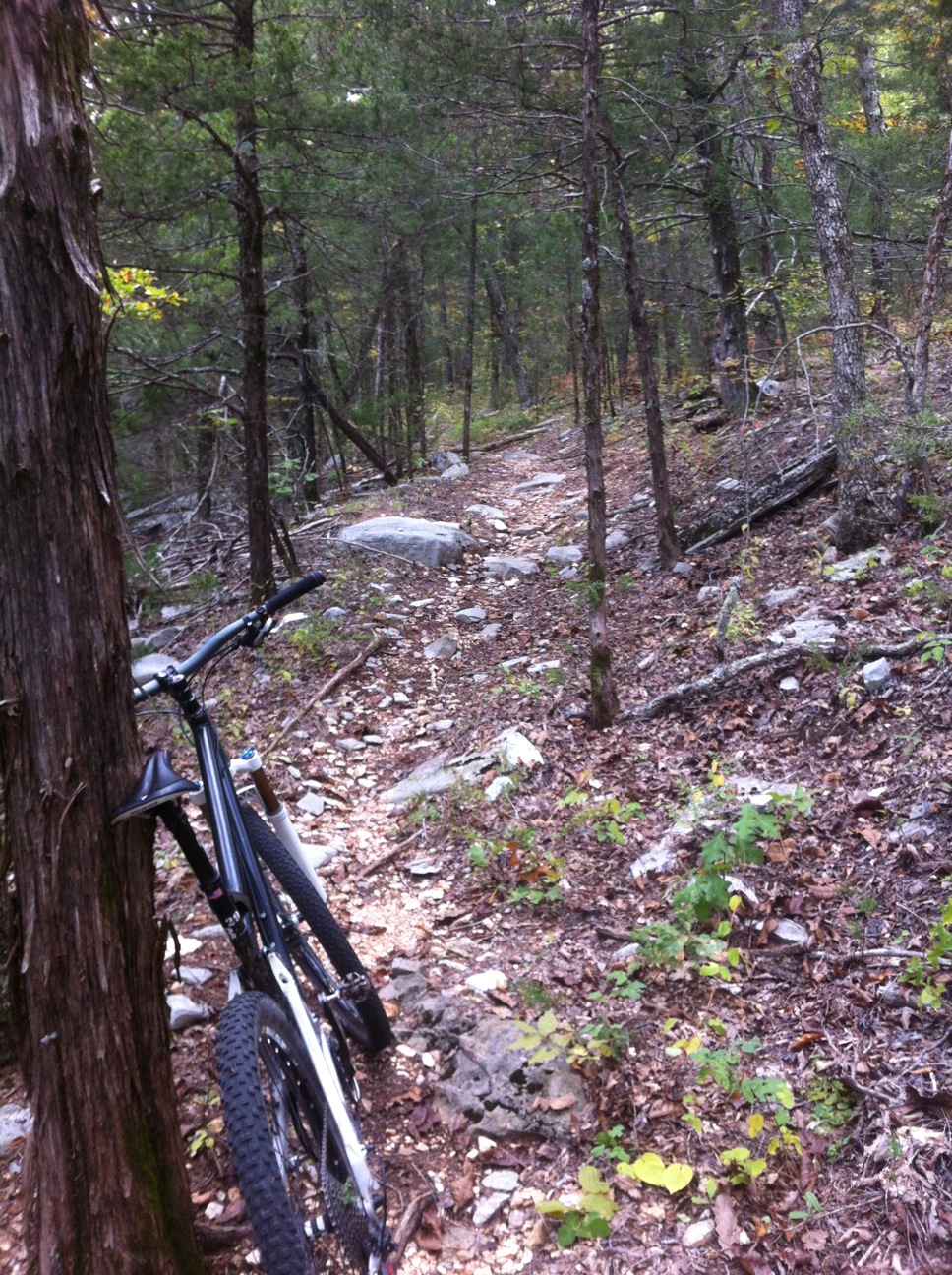 I don’t know what other trail to liken the trail tread to at the moment, but it varied from clean, to sporadic chunk, to constant chunk, tabular and angular in shape to rounded marbles that carried on for some distance. There were a few ‘slick rock’ like bare sections as well, nice. I didn’t care for the marble baby-head-like sections, but the rest kept it variable and fun. 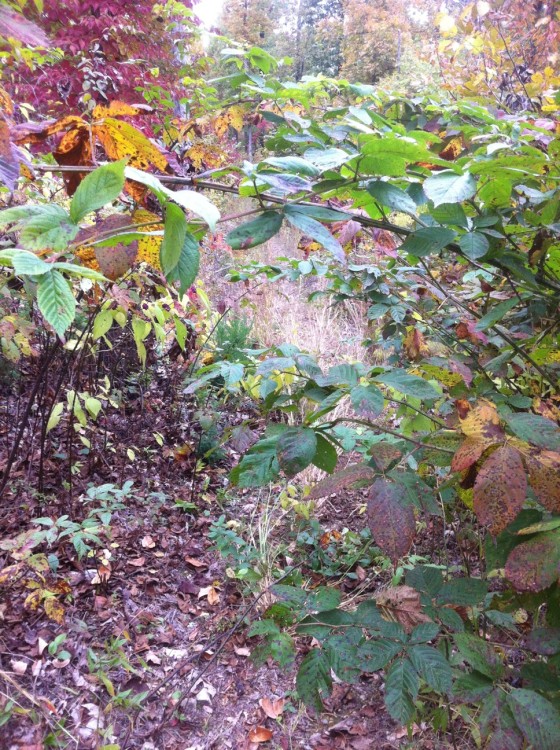 A few miles in I realized the day would be longer than anticipated, partly due to the rocks, but mostly overgrowth that was nearly impassable in some places. It was a bummer. The briars and other thorny vines made it hard to pass without some damage to skin or clothing.

This began as a minor annoyance, something I hoped would get better, but it was fairly consistent. Some sections took a while to pass. There was plenty of trail that was free and clear of any growth, or understory for that matter, but the tight spots were starting to wear on me. I began to wonder who took care of the trails, was there a local club, was IMBA involved in any way for some reason due to its Epic status? I kept riding, and thought it was a shame, the sign on the road now embarrassed me more than it made me feel good, but then again…

I was alone, I didn’t see anyone. It was a weekday, and the trails are kind of removed, but I thought I’d see at least one or two other groups due to its Epic rep, and Forest Service signs telling me this is the place. I was starting to overcome the despair, and realize that this is the shit, I was starting to like the growth, it made the location seem even farther removed, it was back country, for real, I was alone, until I heard a gun shot, saw a house, and some cars… 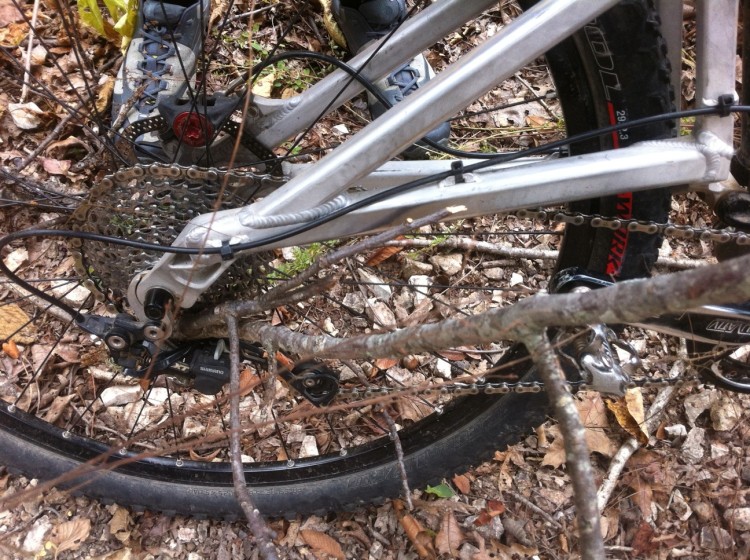 Although I struggled with some scratches I did feel like the overgrowth complemented some of the ass-kicking chunky sections, and general rockiness of the entire system. I thought for a moment that maybe the locals didn’t want a lot of traffic here, this was their filter, but I wasn’t sure how much they would like  riding through some of the growth either. It was a challenge I hadn’t dealt with in a long time, but for now, it was going to be alright. Besides, the 2,000 seeds stuck in my socks and gloves took my mind off the scratches in my arms and legs to some degree. 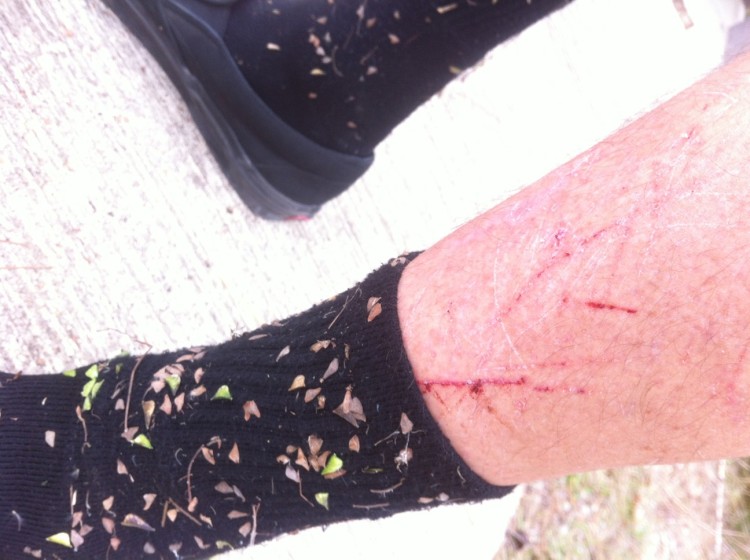 As you can see below, the place is pretty sweet: 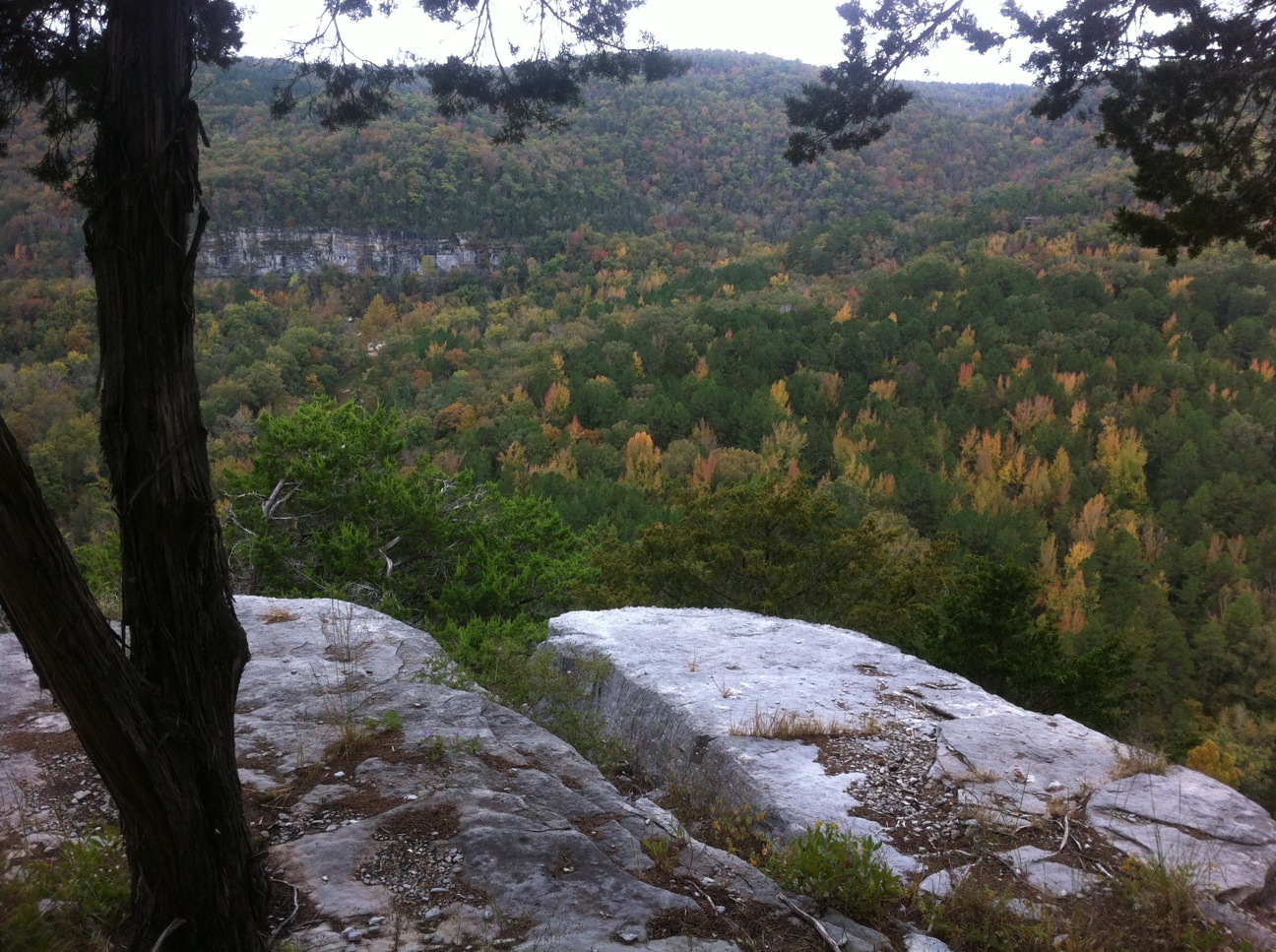 Turns out I was a few months early, as things appear to be looking up for Syllamo: read this

my route’s elevation profile (part of that big descent was on a double track): 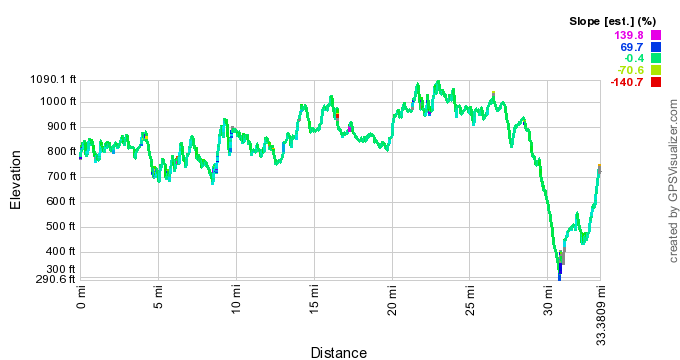 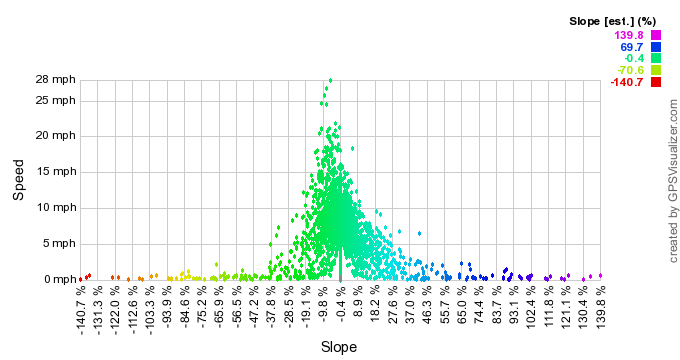