Robert Frost, The Road Not Taken

The [Trail] Not Taken 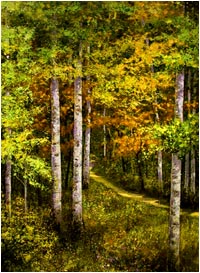 TWO [trails] diverged in a yellow wood,
And sorry I could not travel both
And be one traveler, long I stood
And looked down one as far as I could
To where it bent in the undergrowth;

Then took the other, as just as fair,
And having perhaps the better claim,
Because it was grassy and wanted wear;
Though as for that the passing there
Had worn them really about the same,

And both that morning equally lay
In leaves no step had trodden black.
Oh, I kept the first for another day!
Yet knowing how way leads on to way,
I doubted if I should ever come back.

I shall be telling this with a sigh
Somewhere ages and ages hence:
Two [trails] diverged in a wood, and I—
I took the one less traveled by,
And that has made all the difference.

The Trail Not Taken 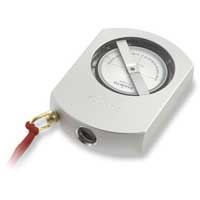 TWO trails, one, or none, could emerge in a blank, yet alive, canvas of habitat,
I’m sorry when the page gets ripped, but not sorry for leaving others blank
One blazer, long I stood waiting for approval, long I walked thinking this and that,
And looked down, and walked back, and down and around again, as far as I could
Bending between the undergrowth, and fallen wood, scaling rock, hazardous critters, and spider webs;

Finally settling with one, maybe not as fare, fair, or far as another,
And having perhaps no claim, some shame, and a little pain
Thinking of the damage that can come from rain
Because in time will come the wanted wear from the tear;
Though as for that laid out with care, and made with sweat for and from those passing there
Worn after it’s torn, born,

And the one that finally lays, out in front before those that track
Under leaves between passers by will be trodden as we had, forward and back.
Oh, the biologist and I kept the other blank, but not for another day!
Knowing how the way leads away from another way,
We doubted if anyone should ever go off track astray.

I telling this with a sigh, and a sliver of hope
Somewhere ages and repairs hence:
A trail could emerge, and maybe diverge in a wood, on a slope, and I—
I helped draw one to travel by,
And that has made a difference, and that’s not all…