The West can get very hot and very cold. There’s no secret here. However, the heat and the cold on the West is dry.

The East? It’s hot, cold and wet. Rain, snow, hail, etc. are a regular occurrence throughout the year and therefore trails are frequently wet and muddy.

When it comes to the trails of the two sides of America, think of the West as read more

I don’t do “The Facebook” so I couldn’t comment at the link^, but there is more to say than I would want to on that site anyway. That said, I’m sure Trevor is a good rider, but I’m not so sure how many “east coast” trails this notion is built upon. Perhaps he should’ve qualified that with the “Northeast”? I know some parts of North Carolina, Georgia, and Alabama(though not “coastal”), or the Appalachians in general, can be chunky like NY, NJ, PA, CT, NH, MA, WV, and VT…, but even this is not quite true. What I am seeing building, riding, and hiking the east is that rocks certainly start to show face on trails no matter how smooth the finish work is. However, depending on the ratio of mineral to gravel, stones, and boulders it’s not like smooth trails are not impossible. Granted, not having any rock gardens is rare in some locations, but not impossible either, and quite often rockiness is a function of more than just local geology.

When routing trails some trail builders don’t like steep slopes because they don’t have the time or patience to deal with the amount of digging time required. They prefer routing trails on flatter terrain, but they lose the bigger triangle of dirt obtained on steeper slopes. A steeper slope can lower the ratio of rocks to dirt. Of course each site is a case-by-case basis, but I find that on soft slopes the trail can be a little more rocky, and in the future there is no slope from which to grab more soil without making a borrow pit to harvest soil. In the North East, or locally in Hudson Valley NY, North Jersey, and some places in Pennsylvania and Vermont, it seems borrow pits are common, but it’s mostly necessary when trails are routed through soft side slopes, or the back slope is not excavated enough (especially 1/2 or 3/4 bench with an outer rock edge to “save” from digging in the back slope). Builders are going to borrow pits to make up for the lack of soil on softer slopes, or not cutting full bench. They could hit steeper slopes and make the borrow pits as they dig the trail. On a steeper side slope the trail is the borrow pit, and it allows for adding extra rolls or drains, and getting soil right from the trail rather than 20 buckets and 20 yards away. In addition, in the future the trail can be lowered with additional grade dips to take soil right from the trail. I think borrow pits might be more work than starting on a steeper side slope to begin with. More importantly perhaps is the fact that it’s hard to surf the mountain, and drain by routing trails through flatter terrain. 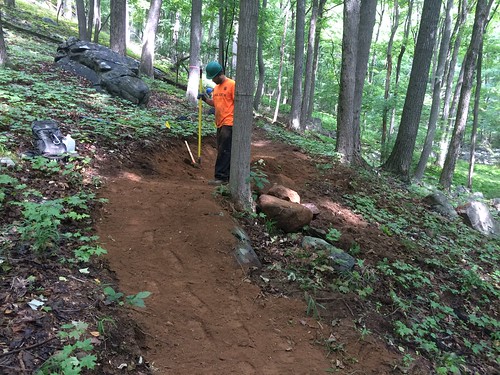 The risk of steeper slopes is that in a lot of places there is bedrock, or huge megaliths just inches below the surface, that could throw your side hill alignment off when they start to show face. Anyway, yes, it can be chunkier here on the East Coast, but I have seen some machine built trails, and hand built trails similar to machine built trails, that are pretty much butter smooth. It takes a little bit of extra effort to produce it by hand, but it is possible. Freeze-thaw can do a number on trails, heaving some of the gravel and stones to the surface, but even then smooth trails are not out of the question.

Anyway, I liked Trevor’s article with the exception of all the exceptions. I have been to a lot of trails in Pennsylvania, which is typically really rocky, but many of them seem to be anomalies (of somebody with trail smarts?). Other times there is no way around it, rock gardens a plenty. I personally like variety, and I’m glad we get that up here in the northeast, but I prefer the ratio of gardens to be small in comparison to the flow and roll.