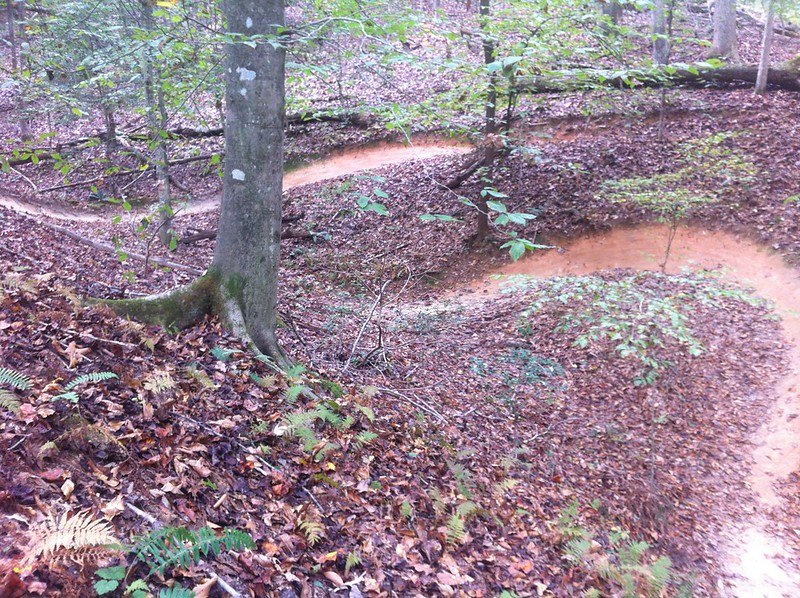 This was a long day, but a lot of fun. I started by the Kerr-Scott dam on some of the first trails built/re-built in the system called Dark Mountain, and as you move farther west I think the trails get newer, and more flowy. It’s not that Dark Mountain is bad, just different. I think some of it feels wider as well. I was equipped with an apparently incomplete paper map, as there were a number of intersections where I struggled to determine if I should go left or right for a loop with no doubling. Even the MTB Project app failed to some degree because I had to break out the phone to zoom in and figure out which branch to take– it did work, just a little cumbersome as the other branches were not shown. I wish I would have had this map of the Dark Mountain section to assist: 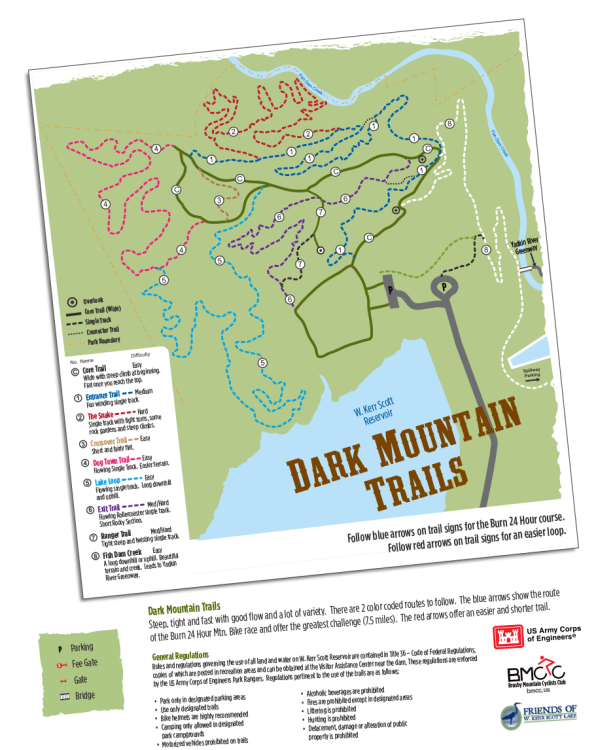 After finishing the Dark Mountain section, the rest was easy to follow.

There are some stretches of pavement (in the route I followed):

You could follow the trail all the way back as an out-and-back, but that would make for a really big day…up to 70 mi?

I was extremely glad I decided to come here, and it’s high on my list of places to visit again. 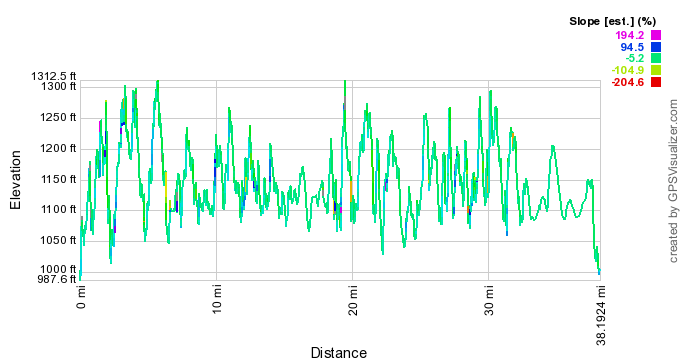 When I finally finished all the trails I had a long journey on pavement to get back to the Kerr-Scott dam from the Warrior Creek section of trails.  When I was heading back to the trail head on the road the road felt weird. I had been on rhythmic undulating terrain in a tunnel of trees for so long that it took a while to shake the trail off and feel the open road– almost like stepping off a boat onto land. On the way back I heard the familiar sound of trail equipment grading, digging…a fluctuation in rpm’s, a rhythmic sound of the machine breathing, it’s breath bouncing off the trees and hillside as it trudges forward, and back, and forward again. There was a lone car parked with a mountain bike on top not far from the sound coming from over the hill and through the trees out of sight. I figured that must be the operator’s car and nice bike. I decided to finish my ride rather than stop and investigate, but I hoped to catch them on my way out, and at this point all I could think about was the food waiting for me in the car. 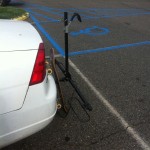 When I got back to my car my skateboard was still there, on the bumper where I had left it in a flurry to get the ride started so I could get back on the road to the next trail, Tsali in this case. The skateboard sat there five and a half hours, and the lot seemed ‘somewhat’ busy. It made me feel good about humanity, or the people that did see it and let it be.

Well fed and finally out of my riding gear, I drove back to see if the sound was indeed trail building activity, thinking what more could they do? I pulled my car up next to the lone car and listened.  Still at it, same sounds, but no sooner than I built up the nerve to hike in and say hello the sound stopped. I stopped a few feet from my car then turned around and walked back to lean on it so I could think about this again– should I bother the operator(s) and/or trail crew. The machine started again, and I was off. I felt awkward approaching the sound knowing I probably wasn’t really supposed to investigate. I know firsthand that sometimes, most times, trail builders don’t want to deal with onlookers or passers by, especially if there are machines running or rocks and timber flying– a work zone they do not want you in for many reasons, including having to stop what they are doing to deal with you.

I approached slowly and cautiously, taking in the new construction, and waiting for him to see me and figure out how he’s going to deal with it. He saw me, throttled down, and then turned the machine off. I braced for a potential reprimand, but he was gracious, and as curious as I because I’m guessing this isn’t a regular occurrence for him. I awkwardly introduced myself along with my interests here, and a 10 second synopsis of my trip and recent trail work. Jim Horton, as it turns out, was a critical piece of making Kerr-Scott a reality. He kindly filled me in on the current and overall project. I walked away wishing I was on the project too, but then again I was glad to get onto my next adventure; and I was happy and content knowing that I discovered information that settled my mind over the question of ‘would I come back?’ Yep.

The new stuff looks like its going to be a lot of fun, a Flow-type trail with some bigish jumps in the mix. It had a signature different than most of what I rode today at Kerr-Scott. According to Horton, he (and the bmc) want to have different feels or styles, like the remainder of the park. I know I like Themes. 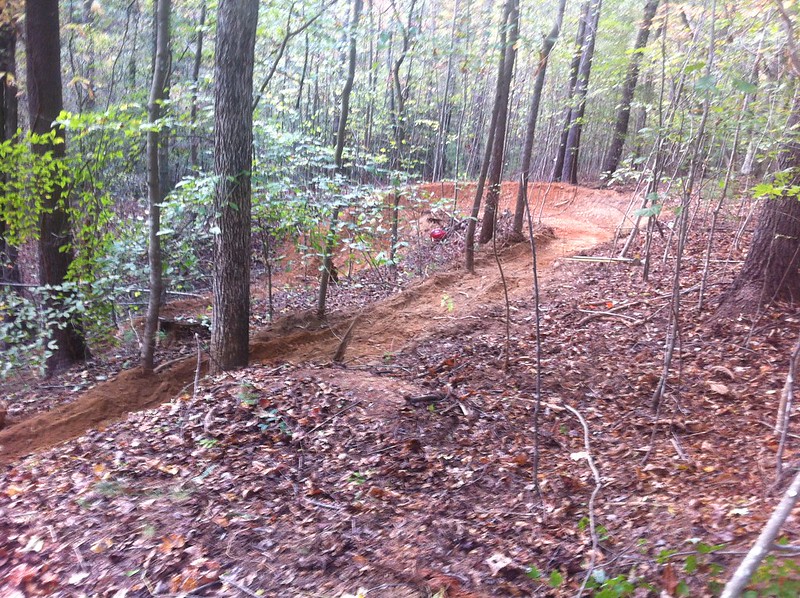 Some interesting history on the trail building: here and here (see the ‘blazing the trail’ section) 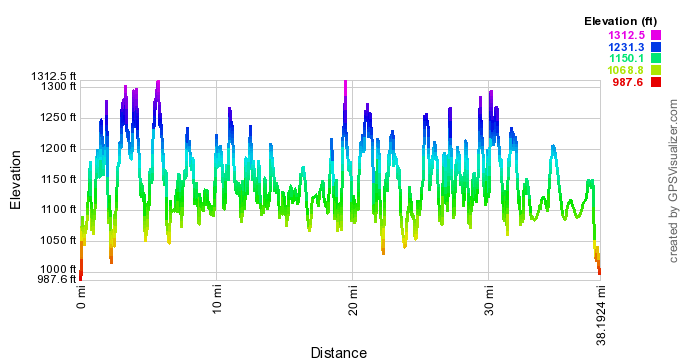 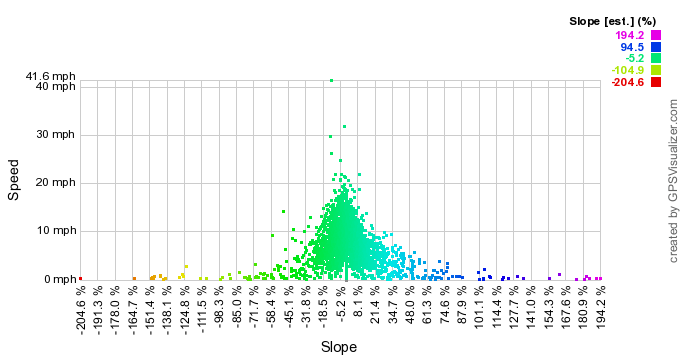